Les Clefs d’Or Canada’s BC Region raised over $15000 for charities in September!

Posted by Alain Ethier on January 5, 2016
Posted in: News from the Regions. 3 Comments 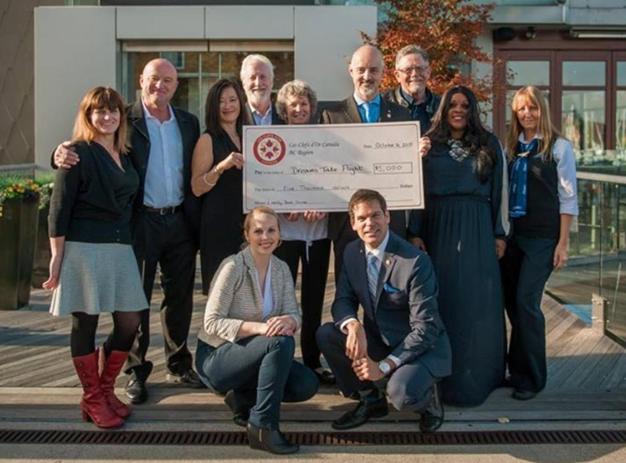 During the month of September, the British Columbia Region raised over $15,000 for 3 different charities!

Les Clefs d’Or Canada – British Columbia hosted the 4th Annual Charity Boat Cruise Event aboard the Brittania with Harbor Cruises. It was a wonderful evening filled with some mouth-watering food and drinks from our gracious sponsors. The weather was on our side and thanks to our amazing volunteers, set up was a breeze. Guests arrived in style and indulged in not only the canapes but also the beautiful sunset.

The British Columbia Region raised around $10,000 for the British Columbia Hospitality Foundation and Dreams Take Flight Vancouver. Presenting of the checks reception was held at the Lift Bar and Grill next to beautiful Stanley Park.

The British Columbia Hospitality Foundation, formed in fall 2006, was established due to the need to have a trust fund that could be used to help anyone within the foodservice, beverage and hospitality industry who required extraordinary support due to illness or accident.

Dreams Take Flight (YVR) is a national non-profit organization made up entirely of volunteers dedicated to providing the trip of a lifetime to medically, mentally, physically, socially or emotionally challenged children.

Les Clefs d’Or Canada – British Columbia Region took part in the Terry Fox Run for the 11th year in a row. It was a damp day, but that didn’t stop our members from supporting such a great cause! We had great attendance and with an overwhelming support from friends and family, we raised over $6,000 to aid cancer research.

We were all given stickers and some of the members chose to dedicate their race to one of our Tourism Partners who recently was diagnosed with cancer. Sponsors for the event did an amazing job of motivating the runners in spite of the rain. It was definitely rewarding to have a well-deserved breakfast after the run. Thank you to our team captain, Ms. Ivonne Mayne – Concierge, Fairmont Pacific Rim.

The Terry Fox Run is a non-competitive event where people get together as individuals, families and groups to raise money for cancer research in Terry’s name. It is a day of celebrating Terry’s legacy and helping to keep alive his dream of finding a cure for cancer.

Terry Fox Runs take place in over 9,000 communities across Canada every year and are accessible to anyone with no entry fee, no minimum pledge and a non-competitive atmosphere. Participants can run, walk, blade or bike and most of all have fun while raising funds for cancer research.

3 comments on “Les Clefs d’Or Canada’s BC Region raised over $15000 for charities in September!”